What is Color Therapy?

By Tom Woloshyn, The Lemonade Guy

Color Therapy is the application or shining of specific colors or frequencies of light onto the body in order to bring healing or balance.  Color Therapy can be used for anything from sunburn and fever, to arthritis and cancer.  One can either sit or lay down in a darkened room with a color lamp projecting the desired color onto the body for one hour at a time with at least two hours between applications. 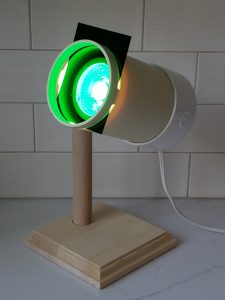 Color is another form of nutrition, however, instead of ingesting orally, we assimilate through the skin of the body.  Every vitamin, herb, mineral, and essential oil has its own unique fingerprint of light which is emitted when burned or heated to very high temperatures.  This study of light is called spectroscopy, whereby a sample of material can be burned and the light analyzed to determine its exact chemical makeup.

How Does Color Therapy Work?

Color Therapy is very similar to the process of photosynthesis in plants.  Plants use chlorophyll, whereby sunlight is used to reassemble the two molecules of water and carbon dioxide into glucose and other organic compounds.  Hemoglobin is the organic compound found in the red blood cells of the human body, and it is a close match to chlorophyll in terms of structure and chemical makeup.  Hemoglobin’s central atom is iron, and the central atom in chlorophyll is magnesium.  These two very similar organic compounds will then share similar chemical and energetic properties.  Since water and carbon dioxide exist in our red blood cells, this similar process to photosynthesis can take place in our body as well.  Plants and humans share over fifty percent of the same DNA.  Bruce Lipton, in his book, “The Biology of Belief,” suggests that there are receptor sites on various cells of the body that are receptive to light.  Western Medicine is even beginning to explore uses of light to treat various conditions such as balding, pain, hormonal imbalances, and jaundice to name a few.

When we start to realize that if there was no light on our planet, there would be no life, we can begin to understand that light is the basis of life’s existence.  This is made obvious when we understand the process of photosynthesis.  In photosynthesis, plants absorb water and carbon dioxide and use sunlight to grow and make food.  When we eat plants, all the light energy contained inside the plant is released during the digestive process as specific frequencies of light and heat.  In fact, we radiate about 75 watts of infrared light at any given 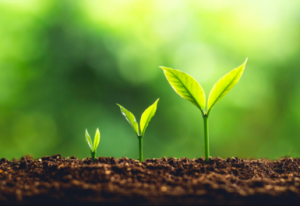 Color Therapy works by creating balance in the body.  It can be used to treat almost any condition or problem, and benefits can sometimes be seen or felt in as little as one hour or less.  If one has a hot or acute condition, such as a fever, any cool color can be used to shine on the body (blue, indigo, violet, etc.), and in one hour the fever will break in most cases. If a chronic or cold condition exists, a hot color is used(red, orange, yellow, etc.)  With chronic conditions, in most cases, a specific schedule of several colors are used over a period of one to two weeks.

Color Therapy is not new.  It is, in fact, an ancient system that the early Egyptians, Romans, and Greeks used as a healing modality.  In fact, stained glass windows in the great cathedrals of Europe began as an art form that evolved from the practice of Color Therapy inside churches.  Small rooms or booths were constructed in sheets of solid colors of stained glass in which people would go into and pray for healing.  This practice was eventually forgotten, however, churches continued to use stained glass as an artform in their windows.

I was told of a study that followed up on people making claims of spontaneous healings while attending church.  The study found that everyone had one thing in common, they all had been sitting in the light passing through the stained glass windows when they had their spontaneous healing.

Today, one simply turns a color lamp on, places the appropriate color gel or filter on the front of the lamp, and lets the light shine onto their body. The more skin exposure, the quicker the color therapy works.

The Primary Colors when Healing with Light. 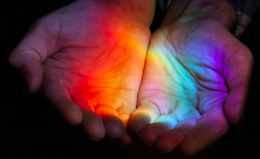 There are many books written about Color Therapy, however, most have many inaccuracies.  The most common mistake is that they do not know that the three primary colors are actually RED, GREEN, and VIOLET.

Almost all books on Color Therapy list red, yellow and blue as primary colors.  When light is projected through these colors onto the same spot, they will not make white light.  Red, Green, and Violet do.  White light is the indicator that you have the correct primary colors.  If you look at sunlight that has been broken up by a prism, you will see three distinct colors which are RED, GREEN, and VIOLET.  You will also see two less distinct colors, and they are yellow and blue.

When RCA first made color TVs, they used red, yellow and blue dots on the screen.  Natural skin tones could never accurately be conveyed on the television screen until they did research into color and changed their dots to red, green, and indigo(as violet was too difficult at the time to create).

Is It Too Simple To Be True?

This very simple modality, due to its’ very nature, is often overlooked and not taken seriously.  The very matter is that light is not matter, and is seen as being unimportant to most people.  Einstein’s equation E=mc2 states that matter and energy are interchangeable as different forms of the same thing, such as ice and water.  Ice and water are the same matter, just at different temperatures.

The start of the Universe was an explosion of light and energy, which later in time became the atoms and molecules that our bodies and the rest of the cosmos are made of.  Some might see this in a different light.  God said, “Let there be light,” and there was light, and it was good.

Stanley Burroughs’ book, “Healing For The Age of Enlightenment,” provides detailed explanation of the various uses of color therapy, directions, and treatment schedules.  A PDF version of “Healing For The Age of Enlightenment” can be found by following this link https://realrawfood.com/sites/default/files/book/Healing%20for%20the%20Age%20of%20Enlightenment.pdf. There is also a chapter about Color Therapy in my book, “The Complete Master Cleanse,” which gives a more detailed explanation of its use.